This post covers the readings from The Acts of the Apostles for the Second Week of Easter, Acts 4:23 through 6:15. For a list of all the readings through the Easter season, click here.

We get a glimpse of the common life of the early Christians regarding property in this week’s reading of Acts. We read, “…and no one claimed private ownership of any possessions, but everything they owned was held in common.” The consequence of this community ownership is found a few verses later – that there was not a needy person among them.

One of the most well-presevered Shaker settlements in America, Pleasant Hill, is not far from my home. From 1805 to 1910, the third largest Shaker community resided on thousands of acres in Kentucky.  At Pleasant Hill, dozens of buildings, including Shaker residences, the worship space, and Shaker workplaces, have been beautifully preserved and are opened for modern-day pilgrims to wander and rest. 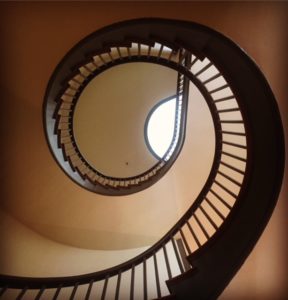 The Shakers were a religious group founded by an Englishwoman, Ann Lee (known as Mother Ann among Shakers). In 1774, she and eight others came to America to share the good news of their expression of Christianity, called the United Society of Believers in Christ’s Second Appearing. Because of their vibrant and ecstatic dances in their worship they were called (disparagingly) shaking Quakers, which eventually became Shakers.

When I first visited Pleasant Hill, I knew the thing about Shakers that most know  – that they were celibate. But on my many visits to Pleasant Hill, from hearing the stories from the guides to reading their letters and notes from a century of life together, I’ve learned they were much more. Some of their ways are still strange to me, but in other ways, they inspire me.

Yes, they were celibate and did not marry. But that is a small part of their story. They practiced economic, social, and spiritual equality for all members, seventy-five years before Congress and the President emancipated slaves and one hundred and fifty years before women could vote. They lived as equals, as brothers and sisters in one large family of God where all property was held in common. They rotated labor and ministry, so one person may work for a while in the kitchen (and both women and men did kitchen work), then move to the fields for planting and harvesting (again, women and men), then lead worship (and yes, women and men). They worked fewer hours than the average laborer of the day, and had substantially longer life expectancies. Most Shakers were literate, as education was a manifestation of faith. New members of their community were included women with young children who had been widowed, deposited by men who no longer wanted them, or escaping abuse; slaves longing for freedom; those who were inspired by this expression of Christianity, and those who simply wanted a home.

During particularly brutal winters, documents of Shaker Village inform us of those who came to be known as “Winter Shakers,” those people who, because of many reasons, did not have enough food or adequate shelter to survive winter and appeared at Shaker Village, saying they wanted to become Shakers. These people were welcomed, likely in the same manner our churches today welcome people who express an interest in being new members. They were incorporated into the life of the community, given shelter, clothed and fed spiritually and physically. They were part of the community…for a few months. When spring came, these new Shakers left, ready to plant their own crops or venture again into the world to secure their fate.

But winter would come again, and the cycle would repeat. Many times the same people returned.

And what did the Shakers do?

For the Shakers, their community, their food, their worship, and their welcome were not their property – all these things belonged to God, and these things, especially the property, were material things devoted to God’s plan, not to be withheld in greed, but shared in love. The Shakers did not believe their property, their community, or their love should be hoarded, but shared willingly. They lived the words of one of their quotes still seen around Pleasant Hill – hands to work and hearts to God.

The Shakers and their life, the very way they expressed the Christian belief that all we have is God’s, to be used for God’s purpose, inspires me.

Too often, though, we forget that we are merely stewards for God, not owners. Our hands to work become only mechanisms for our own prosperity and success, finding our hearts turned to worldly things. That, however, is not in line with our Christian faith, and the account in Acts reminds us of this (as well as many of Jesus’ teaching, but we’re in Acts at the moment). We are responsible for how we use the gifts God has entrusted to us, how we allocate them, and one day we will be called to account for our lavishness or our greed. 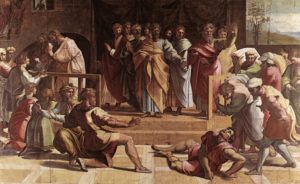 This part of Acts also contains the contrasting and unsettling accounts of Barnabas and Ananias and Sapphira. Barnabas sold a field that belonged to him and gave the money to the followers of Jesus for use for the well-being of the community. Ananias and Sapphira sold some land, too. They, however, kept part of the money for themselves and lied about the whole financial transaction to Peter.

This narrative is a reminder and a warning (albeit extreme) about our responsibility for the choices we make regarding our property and the consequences of our choices. The writer of Acts isn’t saying there’s anything wrong with withholding funds of your own. S/he is saying that to do so as a Christian, to make choices guided by greed, by a sole desire to enrich ourselves by deceiving others (especially those we have promised to love and serve), and by withholding what is dedicated to God’s purpose, will have significant consequences.

I wonder if the writer of Acts might be asking us to consider how allowing withholding what is dedicated to God’s purpose, whether that be finances or our own gifts, will lead to our spiritual deaths? The question is uncomfortable and unsettling for us to consider, especially in our own culture that preaches self-reliance, what’s mine is mine, and the one with the most toys wins.

The Shakers did not, according to popular belief, die out. There are still a few, still living in a communal setting, in Maine.  The decline of their faith and its particular expression came as a result of the mixture of the Civil War and the Industrial Revolution, among other things. They asked their members truly to be part of a common life. I suspect that led to their decline, as well. After all, working for the good of all instead of enriching one’s own bank accounts is quite contrary to the gospel of the United States. And other Christian faiths didn’t focus on community or equality as the Shakers did.

When I wander the paths of Pleasant Hill, my own feet tracing the steps of women leaders of the faith who kneaded bread, taught people to read, yoked oxen, and lead prayers centuries ago, I feel their witness asking me to consider well the words of Acts telling of the early followers of Jesus who shared, who saw each piece of property, each word they spoke, each breath they took, as something that was devoted to God’s purpose of love. They ask me how I am generous with what I own, both property and my spiritual gifts. And they ask me how I am stingy.

This week, read and re-read the portion of Acts, reflecting on the following, either as personal time of devotion or as part of a prayer group or Bible study group. Journal your answers, comment on them in the comment section of this post, or share and discuss them with your study group.

3 thoughts on “Hands to Work, Hearts to God”