This post covers the readings from The Acts of the Apostles for the Sixth Week of Easter, Acts 16:16 through 21:26. For a list of all the readings through the Easter season, click here.

I have several place markers in my life – the universities where I earned degrees, the small towns where I lived, and even the Episcopal Church where I serve. When I meet new people in the course of leading retreats or attending an Episcopal Church conference, I almost always encounter someone who, too, went to the University of Alabama or lived in Mississippi or attends an Episcopal Church. Our conversation almost always treads the road of, “Do you know Jane or John? S/he’s from…” with the end of the statement locating that person in a place familiar to me.

Then we usually have a lovely moment  with each other held together by this common person we both know.

Obviously, there are risks. The do-you-know question always runs the risk on the answer being, “Yes, and he’s a full-on jerk.” But mostly, it’s a reminder of the ties that bind us together in our vast community. We realize we are, in fact, connected by those we know and the people we’ve encountered.

In Acts, we encounter names…lots…of…names.

Last week we even had the tiny, almost overlooked explanation about Saul’s new name. We simply read he is now known as Paul. No real explanation. Maybe he changed it to avoid the baggage that most certainly accompanied the name Saul. Paul could have been another given name to Saul. Whatever the reason, Paul is now among us in the narrative.

Paul, however, is not alone.

The writings of Acts are filled with names. We have the names of some of the twelve disciples, some historic figures, and many names of those involved with the early church.

So why all these names?

My imagination sees Luke and Acts, copied from original scrolls by early scribes, being read in the midst of early Christian worship. They gathered in the home of a fellow Christian, praying together, celebrating the Eucharist together, and sharing a meal. They also read the scrolls that would eventually become Acts or perhaps a letter from Paul or maybe even sayings about Jesus compiled by a disciple that have been long-lost to our modern church. 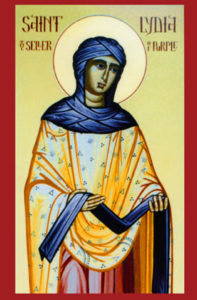 “Oh, Lydia! Yes, remember when we met her last year when she came to the market. She told us all about the community and how she and her entire household were baptized!”

“Did that letter mention Timothy? My son traveled with him briefly last year. His mission travels are awe-inspiring.”

“You’ll never guess who I met last month when I was in Ephesus – Priscilla and Aquila! They said they were traveling with Paul again and hoped to come through here soon.”

The names we read in Acts were real people, many influential in the early church and whose names invited those who would come after to tell their stories and recall their place in our church. Many became official saints of the church. They are mentioned so that people would remember them and their ministries. The names are not exclusively of powerful men. In fact, the few powerful men who are named almost always serve as cautionary tales of selfish choices.

Their names serve to remind us of our heritage, the acts of the apostles of the early church that inspire us in our acts of the modern church.

By Bill Sutton – Lynched in Alabama eji, Montgomery, CC BY 2.0, from WikiCommons

We can, however, in the church become too enamored with the names of the past. We etch them in memorials, singing praise to famous men while reducing the story of those who have also built our faith and challenged us to love more to a footnote in a church history or ignoring those names all together.

Names are placeholders for the story of the church. The people we remember by name tell us what acts, what ministries, what message of the Gospel we hold important. The names we don’t memorialize also tells us something about our Church.

This week, walk around your church or a church in your city. Whose names are memorialized? Do you know their stories? If not, ask someone in your church about them and their ministries. What message do you think remembering this name says about what the church holds important?

Do you notice names that aren’t mentioned? What might that say, as well? What might happen if you approached your congregation about remembering some of these names in a prominent way?

2 thoughts on “Remembering the Names”