This post covers the readings from The Acts of the Apostles for the Third Week of Easter, Acts 7:1 through 10:16. For a list of all the readings through the Easter season, click here.

Then the Kentucky Derby comes around…and everybody suddenly loves horses. Living in Kentucky, I can attest to the thousands of people who suddenly become very interested in all things horses. The horse farms in the area find themselves inundated with tourists groups wanting to see a champion horse. Stores are stocked with horse-related clothing, and most stores can’t sell enough. I still remember the day I stopped into a local restaurant to get dinner to go, and I was clad in muddy riding boots and jods (riding pants) from my day at the barn when a woman wanted to know where I had gotten such “authentic-looking” horse clothing.

Everyone is horse-crazy for a couple of weeks, then the Derby runs, and a winner gets the roses, and life returns to its regular pace.

But for those few weeks, everyone wants to be part of the story, to touch some aspect of the big event that’s happening, whether by learning about horse farms, going to the race, or simply having a Derby Party.

Acts is a collection of stories, accounts, and sermons. This week’s readings contain two of the three Kentucky Derby moments of Acts, the things even those who are only casually interested in the text of the story know: Stephen’s stoning and the Conversion of Saul to Paul. The other, one account of the coming the the Holy Spirit at Pentecost, happens right at the beginning of Acts.

And you know what? If those are the only three stories someone knows from Acts, we still touch a part of the big event that is the early days of the community of the Jesus movement.

But there is so much more than just those big events, just like there is so much more to horses than the Kentucky Derby. Acts is a nuanced, complex story about humans trying very hard to become aware of how Jesus is present in their lives and how this presence calls them to change. Saul to Paul is one extreme example, but other accounts fill the text of Acts. Acts also tells us the sacrifice of following Jesus – and it’s not only a theoretical sacrifice. Following Jesus called the early Christians and calls us to give up some of the very things we are convinced we absolutely cannot live without. Following Jesus calls us to confront some true stories about ourselves we do not want to acknowledge.

While the martyrdom of Stephen may be one of the big stories we know from Acts, many of us aren’t exactly sure why Stephen was martyred.

“Well, because he was a Christian,” we might offer.

We aren’t given a detailed description of who, exactly, the people are. We read the elders and scribes are unhappy with Stephen, but they are named separately from the people. So perhaps we are reading an account of how quickly people can be excited by something (or someone), then turn on that same thing/person when we realize we might have to change because of this formerly-wonderful (in our minds) thing or person.

Stephen is arrested, brought before the council, and questioned. In response to the accusation that Stephen is speaking against “this holy place and the law” (Acts 6:13), Stephen tells a story.

He tells the story of Israel’s history. He tells of Abraham, who heard God’s call and became part of God’s covenant. He tells (albeit briefly) of Jacob and Isaac. He tells of Joseph, an unexpected player in the narrative of liberation. He tells of Moses. He, in fact, speaks longest about Moses and Moses’ wisdom and power.

Stephen tells the people what they want to hear – that they are part of this amazing story of God’s love. I can see them nodding in agreement, maybe thinking, “Well, this guy’s not so bad. Maybe we overreacted.”

Stephen, however, is not finished. He keeps telling the story. He tells of how the people opposed the Holy Spirit, of how the people (and I’d hear us) persecuted the prophets. He confronts the people with our ability to love the idea of the law but to ignore completely the law itself in our daily actions. 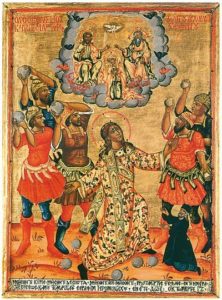 We love to hear the story and be part of the story…until we have to hear the parts that confront us, accuse us, and challenge us. Then our response is very much that of the people who heard Stephen tell his story – we become enraged. Stephen is stoned. Our modern response may not be a physical, but we still inflict the same damage when we follow Jesus in theory, but not in practice.

In the 17th century, spiritual autobiographies became a popular way for Christians in the Protestant tradition to trace their journey of faith. The ones written during this era tend to follow the pattern of recognizing the state of youthful sin into an awakening of God’s presence that then moves the person into a full state of grace. While these spiritual autobiographies always seem a bit too neatly ended with an assurance that the writer is now fully aware of God’s grace, I do appreciate their focus on the times they were confronted with God’s presence in their lives and they responded by stoning that presence of God or whatever way we try to silence the voice of love and grace that meets us where we are and calls us to be and do more in love.

So what is your part of the story of the Jesus movement? But not just the good parts. What about the parts of the story we don’t want to tell? This week, spend some time reflecting on your spiritual autobiography, with a focus on the times when we were challenged by God and didn’t respond with grace and welcome.

What were the major events of your life with God that unsettled you? Who were the significant people and places who disturbed you and made you aware of a limit you’d placed on love? What situations frayed the edges of forgiveness for you?

When have we persecuted the prophets? When have we loved the idea of the law of love Jesus taught, but refused to embody that same law of love in our relationships with others? What parts of the story of our own lives do we not want to hear, in our person and in our church?

Spend some moments each day with your story. You may want to write it out, draw pictures, or find particular songs that represent significant moments in this part of your story with God. And yes, remembering this part of our story is hard, courageous, and raw work. These words and memories are the chapters we’d rather skim over, explain away, or ignore.

This week, engage these stories surrounded by love and the presence of Christ, and remember, like Saul, God can and will (and maybe already has) transformed these stories.

1 thought on “The Story We Don’t Want to Hear”